Even before the Tour de France came to Yorkshire in 2014, the Brits have been keen cyclists. Since then, the number of cyclists on the road has grown and grown, helped by subsequent Tour de Yorkshires and the general interest in cycling.

We have cycled off and on for years but are 100% fair weather cyclists. Much to the disappointment of our brother in law (a super fit and keen cyclist) we timed our move from Harrogate to Appleton just weeks before the Tour de France cavalcade arrived. Which meant driving back to Harrogate for day trips, rather than being within walking distance from our old house for all the Tour celebrations and races.

From most directions there are some steep hills in Appleton; that combined with being so busy on barn renovations meant our bikes stayed unused in the pig pens. All our trips out to the countryside were walking ones; and why not, with so many fantastic walks from the door.

And then one spring, a neighbour cycled past on a flashy new electric bike. Those who know Ian (or who have stayed in the Long Barn) know he loves the latest tech. The clincher was our neighbour saying that in his opinion, given all the hills around Appleton, having an electric bike made the difference in wanting to go out for a bike ride, or not. I saw the glint in Ian’s eye, and knew resistance was futile. Some weeks later, we became the proud owners of two Haibike electric bikes. And our cycling adventures began. 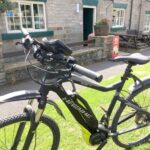 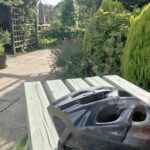 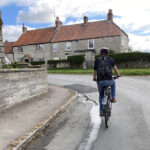 There have been highlights and the odd low light. I’ll start with the lowlight first. The saddles the bikes came with weren’t the most comfortable, and after a couple of rides out, I decided to invest in one with more cushioning. We have an amazing cycling shop nearby, called Big Bear Bikes, so they were the obvious choice. I explained what I was looking for, and with a glint in his eye, the helpful sales assistant explained that they came in different sizes, and they had a fitting service. Or, as he described it in broad Yorkshire, “I’ll go and get the ‘arseometer’….” I froze and tried to imagine a. an arseometer was  b. how it measured and c. what it would say. Thankfully it turned out that it something you sat on that measured your hip bones, and it was wielded by a very helpful female member of staff. So 10 minutes later, I was the proud owner of a MEDIUM seat. Phew.

Highlights of our cycling adventures have included cycling to Malton and back for the annual food festival (a 30 mile round trip) and our favourite lock down ride which takes you through Hutton Le Hole, Gillamoor, Fadmoor, Kirkbymoorside and home via Spaunton. If we are honest, sneaking into our highlights is also burning off the odd man in lyrcra up a hill as we build up a head of steam and cruise past. 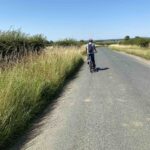 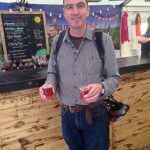 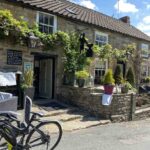 We highly recommend renting bikes from Big Bear when you stay at the Long Barn (your choice if you want to call upon the arseometer) You really do see a different perspective on the amazing countryside, and can travel further than just hiking. The beauty of electric versus nonelectric is that everyone can ride together. The super fit athletes can stick with their road bikes, and the more recreational cyclists can try out an electric bike. With the hills round here, you still get plenty of exercise. Ian describes how our bikes work as that it’s like you’ve got a lazy Chris Hoy riding in tandem behind you. He’ll only start peddling when you do; but when he kicks in, you do feel the benefit.

We are happy to help you organise bikes from Big Bear for your stay. Or you can visit them in Pickering; they also have bike hubs in Dalby Forest and at Sutton Bank.

And who knows, you may get bitten by the bug and decide to make it part of your exercise/travel routine when you return home.