Appleton le Moors has a thriving history group; thanks to them as well as several other people, there is an impressive record of village history going back to the 12th century.  In the Long Barn, you’ll find a copy of “A Baker’s Dozen”, detailing the history of thirteen properties of note in the village selected by the history group. Our very own Town End Farm makes it into this publication as the 9th property highlighted.

We are learning about village history as well as that of other villages around Appleton. So below are a few details that we’ve gleaned from the History Groups publications.

Appleton Le Moors was established in the 12th century on a planned pattern by St Mary’s Abbey York. It’s thought to have been created out of ploughed land, laying the crofts and tofts over former strips of the east and west fields. The toft is the land on which the house was built, the croft is the adjoining plot of land used for pasture or arable. When you explore Appleton, you’ll see why it’s thought to have been planned in this way; it’s strikingly regular in its rectangular shape, back lanes and house “garths” of uniform size. A garth is a “small grass enclosure adjacent to a house.” 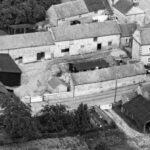 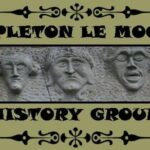 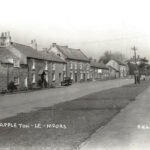 Appleton was originally called “Woodappleton”, reflecting how important woodland was at this time. In the first half of the 20th century, Appleton was principally the main street with 30 houses each side, most facing the road and each with their own private access to the garth at the back of the house. These garths were originally market gardens and fruit orchards, hence the name Appleton. Fruit from the area was sent off to London when the railway came to Kirkymoorside.

The Reading Room is the landmark that for us marks that you are arriving in Appleton. It was built for the village in 1911 and funded by Joseph Page, the resident butler at Appleton Hall. Most people involved assumed it was a philanthropic gift for the community but it is possible it was a condition of a demolition of 3 houses, replaced by one house for Joseph Page. The Reading Room was mainly used by agricultural workers, as potentially a cheaper alternative than visiting the pub. Apparently in Edwardian times, going to the pub was not always considered a respectable activity. The Reading Room fell out of favour after world war 2, and was closed in the 1940s. It was latterly re opened and renovated with various grants. It now hosts a book and film club and is hired out for events.

The Village Hall, between the Long Barn and was originally the village school. It was built in tribute to the man who built Appleton Hall, at the north end of the village. Joseph Shepherd was a prosperous merchant and ship owner; his wife built the school in tribute to him after he’d died in 1867.

When walking up to the Moors Inn, look out for the “3 Faces” house on the right. It has 3 satirical faces carved into the wall above the door representing the doctor, lawyer and parson. The initials TAOTLHTGB stand for “The Art of Treating Life How To Get Bread”. At one point in the 19th century, it was a beer house. Different to the pub, they could serve no fortified wine or spirits, nor could they open on a Sunday. The beer was usually served in jugs or dispensed from tapped wooden barrels on a table in the corner of the room.

The Moors In was built in the late 18th century and is grade II listed. It is shown as being an inn from 1782 onwards and was called the Oddfellows Arms from 1842. It was renamed the Moors Inn in the 1980’s. The story is that the new landlady Ida Moore insisted the name was changed because she said she was already married to an odd fellow, and working in an Odd Fellows pub as well was too much for her.

Our very own Town End Farm House was built in 1750’s and is described as “undoubtably the best house in the village”. It was the first “new style” house built in Appleton with a central entry doorway and set back from the village’s street. The farm buildings are thought to be 18th century. The original carriage house to the barn was sold off in the 20th century and became a separate dwelling. If you look next door, you can see the arched entrances that the carriages would have been driven into. Our neighbour Barry worked in the farm as a boy, and remembers livestock being kept in the barns which make up the Long Barn. The smaller barns opposite the Long barn used to house pigs. He also remembers dances taking place on the top floor of Town End Farm House. The gable window you can see used to be a doorway which hay and straw was winched up through. 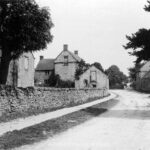 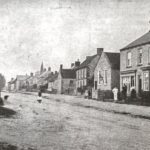 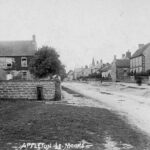 For those guests who are particularly interested, we can arrange a village history walk with Jim, a local villager and guide, who can bring the village’s history alive.